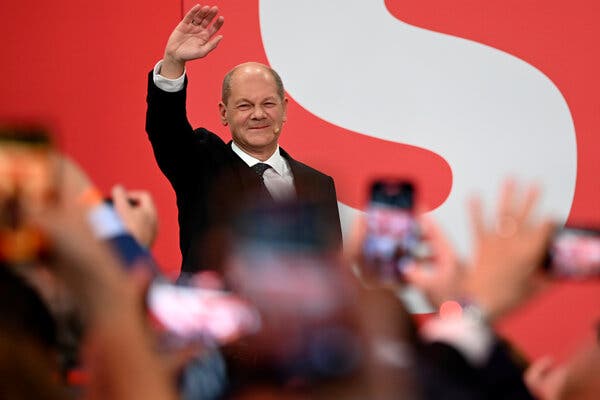 Olaf Scholz, the S.P.D. candidate, during the election party in Berlin on Sunday.Credit…Britta Pedersen/DPA, via Associated Press

A narrow result in the German election

Germans have voted for change: The Social Democratic Party has beaten Angela Merkel’s Christian Democratic Union by a slim margin of 1.6 percentage points, for a total of 25.7 percent of the vote.

The close outcome means the Social Democrats must team up with other parties to form a government. If they fail to do so, the party that placed second could wind up leading the country. Forming a coalition could take weeks if not months, leaving Europe’s biggest democracy suspended in limbo at a critical moment in the continent’s pandemic recovery.

The result follows a volatile campaign. Armin Laschet of the Christian Democrats was seen as the front-runner until a series of blunders eroded his party’s lead. Olaf Scholz’s steady persona led the Social Democrats to a spectacular 10-point comeback. And the Greens, who briefly led the polls, fell short of expectations but recorded their best result ever.

Next steps: A likely coalition would involve the Social Democrats, the free market liberal Free Democrats and the Greens.In the days leading up to the election, hundreds of thousands of protesters turned out in more than 400 German cities, calling for the winner to put climate protection at the top of the agenda.

Quotable: Speaking at the Social Democratic Party’s headquarters, Scholz addressed the crowd: “People checked the box for the S.P.D. because they want there to be a change of government in this country and because they want the next chancellor to be called Olaf Scholz.”

Legacy: As Merkel steps down after 16 years as chancellor, she leaves behind a profoundly changed Germany. Our reporter traveled to several cities and saw transformations in climate policy, religious tolerance and diversity.

After Merkel: For over a decade, Merkel was not just chancellor of Germany but effectively the leader of Europe. Can Emmanuel Macron, France’s president, fill her shoes in leading the E.U.? Despite the vacuum she leaves, a Macron era is unlikely to be born.

Boris Johnson, the British prime minister, announced late on Saturday that he would reverse course and offer 5,000 three-month visas to foreign truckers in the prelude to Christmas to combat a driver shortage that has left some supermarket shelves empty and caused long lines at gas stations. Visas for 5,500 poultry workers will also be made available in the same period.

The decision reflects growing alarm within the government over a continuing disruption to supplies. Britons have emerged from 18 months of pandemic-imposed hibernation to find many of the same afflictions the country had during the 1970s. The risks for Johnson are acute.

Since Britain completed the final stage of Brexit in January, employers have been unable to freely recruit European workers, and the coronavirus pandemic has also worsened a crisis that stems from a long-term shortage of British truckers. Today, Johnson will consider a plan to use hundreds of soldiers to drive a reserve fleet of tankers.

Johnson’s competition: Competent but low on charisma, Keir Starmer, the Labour Party’s leader, has yet to give British voters a clear reason to support the main opposition party, critics say.

Here are the latest updates on the virus and maps of the pandemic.

A political game over America’s debt

For nearly two decades, U.S. lawmakers have waged an escalating display of brinkmanship over the federal government’s ability to borrow money to pay its bills, though they have never actually tipped the country into default. This fall, the threat is greater than ever, as Republicans in Congress have refused to help raise the nation’s debt limit.

Republicans agree that the U.S. must pay its bills, but today they are expected to block a measure that would enable the government to do so. Democrats, insistent that Republicans help pay to increase spending and cut taxes, have refused to use a special process to raise the limit alone. The need to borrow stems from the bipartisan practice of running large budget deficits.

If the limit is not raised or suspended, the government will soon exhaust its ability to borrow money, forcing officials to choose between missing payments on military salaries, Social Security benefits and the interest it owes to investors. Defaulting could also roil financial markets and capsize the economy’s nascent recovery from the pandemic downturn.

Deadline: No one is quite sure when the government will run out of money. Estimates for what’s known as the “X-date” range from as early as Oct. 15 to mid-November.

Democrats: For Nancy Pelosi and Chuck Schumer, the two top Democrats in Congress, the coming weeks could pose the most difficult test that any pair of congressional leaders has faced. On Thursday, the House will vote on a bipartisan $1 trillion infrastructure bill, giving Democrats more time to reach consensus on President Biden’s domestic policy package.

Stories From the U.S.

Suzana Garcia is a former TV commentator known in Portugal for her inflammatory messaging on race. She is running for mayor of Amadora, a city adjacent to Lisbon with one of the largest Black populations in the country.

Garcia’s high profile and combative persona mean she has tapped into a question far larger than who should be mayor: How should a former colonial power like Portugal deal with today’s debates about racial justice?

Wole Soyinka is not going anywhere

When the first Black winner of the Nobel Prize in Literature — and its first African winner — senses that freedom and democracy are under threat in Nigeria, he has to get involved, reports Ruth Maclean.

“It’s a temperament,” said Wole Soyinka, 87, during an interview in Abeokuta, his hometown in southern Nigeria.

“Chronicles From the Land of the Happiest People on Earth,” his first novel in nearly 50 years, is being published in the U.S. and the U.K. on Tuesday. Set in an imaginary Nigeria, it’s a satire about how the accumulation of power can go awry. “Something has happened to the quality of sensibility in this nation,” he said. “I haven’t put my finger on it completely. But something has given in this nation. Something has derailed.”

Boko Haram has terrorized northeastern Nigeria for over a decade. Mass abductions have swept the north. Police brutality has stirred a protest movement. Secessionist groups have attacked government offices.

Those threats keep bringing Soyinka back to the forefront. “I know, I know, I know. I’ve announced a number of times I’m withdrawing from public life,” Soyinka said. “And I meant it! For about 24 hours.”

Read more about the novel here.

In Prada and Versace shows at Milan Fashion Week, the clothes made sex the main topic of conversation.

You have until Sept. 30 to stream a rare operatic treasure: William Grant Still’s “Highway 1, U.S.A.,” staged by Opera Theater of St. Louis.

That’s it for today’s briefing. Have a great week. — Natasha

The latest episode of “The Daily” is on Germany and Europe after Angela Merkel.

Whet Moser wrote today’s Arts and Ideas section. You can reach Natasha and the team at [email protected].

It Could Have Been a Fresh Start. But Germany Is Stuck.