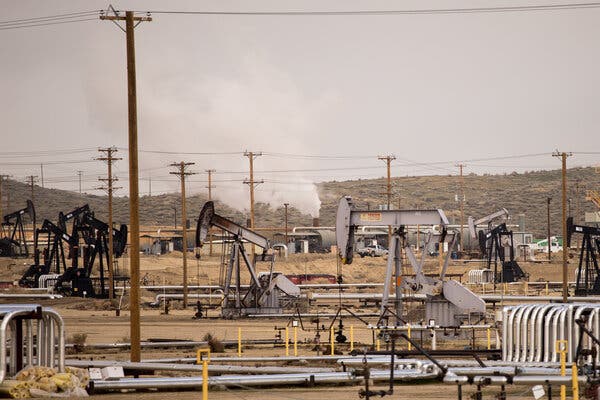 A natural-gas-fired power plant in Kern County, Calif. Methane is the main component of natural gas.Credit…Joel Angel Juarez for The New York Times

A pledge to reduce methane emissions

Thirty-two countries have joined the U.S. in a pact developed with the E.U. to reduce methane emissions 30 percent by 2030. It is part of an effort to set new targets to slow global warming before a major U.N. climate summit in Glasgow next month.

Methane is the second-most prevalent greenhouse gas after carbon dioxide, but is much more potent in the short term in its ability to heat the planet. It is the main component of natural gas, and is also released into the atmosphere from landfills, livestock and thawing permafrost.

The conference aims to persuade nations to slow global warming so that temperatures rise no more than 1.5 degrees Celsius compared with levels before the Industrial Revolution — the threshold beyond which scientists say the dangers of global warming grow immensely.

Details: While the four heaviest emitters of methane — China, India, Russia and Brazil — have not joined the pledge, nine of the world’s top 20 methane polluters have signed on, among them Canada, Indonesia, Pakistan, Mexico, Nigeria, Argentina and Iraq, in addition to the U.S. and the E.U.

A pregnant woman received a dose of the Pfizer vaccine in São Paulo, Brazil, in June.Credit…Carla Carniel/Reuters

Pleas for pregnant women to be vaccinated

Unvaccinated pregnant women made up nearly 20 percent of the most critically ill Covid-19 patients in England, according to data released by the country’s National Health Service. The N.H.S. is pleading with pregnant people to get vaccinated as soon as possible.

Covid-19 poses a significantly higher risk to women who are pregnant and outweighs the risks of vaccination, according to the C.D.C. In the U.S., vaccination rates among pregnant individuals are far lower than in the rest of the population. As of Sept. 18, only 31 percent of pregnant women had received both shots before or during pregnancy.

Fears that the vaccine poses severe risks to the health of pregnant people are not borne out by the data. More than 100,000 vaccinations have been administered to pregnant people in England and Scotland, with “no subsequent harm to the fetus or infant,” according to N.H.S. data.

Quotable: “The disproportionate number of unvaccinated pregnant women in intensive care demonstrates that there is a significant risk of severe illness from Covid-19 in pregnancy,” said Dr. Edward Morris, president of the Royal College of Obstetricians and Gynecologists.

Syria is still shattered, with its people mired in poverty and millions of refugees in neighboring states still afraid to go home. But across the Middle East, there is a sense that Bashar al-Assad, the country’s president, is being brought in from the cold, reflecting a resignation with his survival.

In recent months, he and his government have been in communication with officials and leaders from Lebanon, the U.A.E., the U.S. and Jordan. International powers have largely given up on seeking peace through diplomacy, and many acknowledge that 10 years of war, sanctions and peace talks have failed to secure concessions from al-Assad.

Despite these bridge-building exercises, and his apparent victory in the civil war, al-Assad’s grip on power is often tenuous even in areas he controls. Swaths of Syria are run by jihadists and rebels, while the northeast is administered by Kurdish-led forces backed by the U.S.

Moving on: With the Syrian economy in tatters, the owners of local businesses are closing up shop and relocating to Egypt, Turkey, Iraq or Gulf countries. “The Syrian government has no money and wants to collect its employees’, soldiers’ and militiamen’s salaries from the traders and industrialists,” the owner of an ice cream company said.

A bottle of perfume; a Persian silk carpet; a porcelain bowl from Vietnam; three robes apparently made of white tiger and cheetah fur.

Gift exchanges between U.S. and foreign leaders are typically highly regulated. During the Trump administration, they sometimes devolved into shambles.

DC Comics is ushering in a new Superman, the son of Clark Kent and Lois Lane. Jonathan Kent is concerned about the environment, does not shy away from politics and will soon begin a romantic relationship with a male friend.

“The idea of replacing Clark Kent with another straight white savior felt like a missed opportunity,” Tom Taylor, who writes the series, said. “A new Superman had to have new fights — real world problems — that he could stand up to as one of the most powerful people in the world.”

Though Superman is not the first L.G.B.T.Q. hero, and will not be the last, comics experts said that there was something particularly momentous about the fact that this hero was Superman, rather than a minor character.

“That counts for something,” said Glen Weldon, the author of “Superman: The Unauthorized Biography.” “Just in terms of visibility, just in terms of the fact that this is going to attract attention.”

Read more about the next chapter of Superman.

For centuries, the jagged scenery and unpredictable seas around the Scottish archipelago of St. Kilda have electrified the imaginations of adventuring visitors.

Your toaster isn’t built to last. Here’s how to squeeze as much life as you can from it.

That’s it for today’s briefing. See you next time. — Natasha

P.S. The New York Times Book Review just turned 125. That got us wondering: What is the best book that was published during that time? Let us know here.

The latest episode of “The Daily” is on the future of towns most affected by the climate crisis.

Doing Economics as if Evidence Matters

It’s Never Too Late to Fall in Love

Is Aaron Judge the Next Yankees Captain?