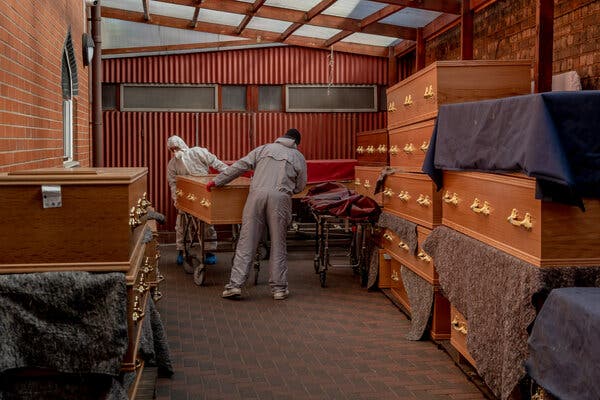 A temporary morgue in Birmingham, England, in April.Credit…Andrew Testa for The New York Times

Britain’s initial response to the Covid-19 pandemic “ranks as one of the most important public health failures the United Kingdom has ever experienced,” a parliamentary inquiry led by lawmakers from Boris Johnson’s own Conservative Party reported yesterday.

The highly critical report blamed the government for “many thousands of deaths which could have been avoided,” as well as for its failure to carry out widespread testing or swiftly impose restrictions early in the pandemic, as the country pursued wider “herd immunity.”

Britain has experienced one of the worst Covid-19 outbreaks among wealthy nations, with 162,000 deaths officially attributed to the disease. Since last winter, the country has become one of the world leaders in vaccinations, though infections remain high amid few restrictions on the public.

Background: A large faction of Conservative lawmakers consistently opposed pandemic restrictions. The government’s decision not to order a lockdown or conduct contact tracing was a result in part of officials’ belief that the British public would not accept such restrictions — a view that turned out to be false.

The Port of Savannah in Georgia, like many ports worldwide, is contending with a staggering pileup of cargo.Credit…Erin Schaff/The New York Times

The resurgence of the coronavirus and supply chain chokeholds threaten to hold back the momentum of the global economic recovery, a report from the International Monetary Fund warns. Though overall growth is forecast at 5.9 percent this year, the expansion reflects a vast divergence in the fortunes of rich and poor countries.

Uneven access to vaccines and health care is at the heart of the economic disparities. In low-income countries, a staggering 96 percent of people are still unvaccinated, while poverty, hunger and unmanageable debt are all on the upswing. Employment has fallen, especially among women, reversing many of the gains they made in recent years.

For advanced economies like the U.S. and Europe, the outlook has also darkened amid supply shortages, weakening consumption and a lack of workers. Fears of rising inflation — even if likely to be temporary — are growing, as prices climb for food, medicine and oil, as well as automobiles.

Quotable: “Recent developments have made it abundantly clear that we are all in this together and the pandemic is not over anywhereuntil it is over everywhere,” Gita Gopinath, the I.M.F.’s chief economist, wrote in the report.

Éric Zemmour, an anti-immigrant best-selling writer and TV commentator, is surging in opinion polls before France’s presidential elections next year — even though he has not yet declared his candidacy.

Until a few weeks ago, most had expected the elections to be a predictable rematch between Emmanuel Macron, the centrist president, and the far-right Marine Le Pen. New polling places Zemmour in the No. 2 spot, disrupting campaign strategies across the board. Experts have warned, however, that such early polls may be volatile.

After weeks of ignoring Zemmour, Macron has begun to criticize him, though not by name, while government ministers and other allies have also attacked him. Le Pen, who has sought to broaden her base, finds herself in the unusual position of being outflanked on the right.

Background: The son of Jewish parents who came from Algeria, Zemmour styles himself as the great defender of France’s Christian civilization. His influence has risen to new levels in the past two years after he became the star of the Fox News-style network CNews.

Supporters: Fans of Zemmour decry social forces they deem “wokisme” — a #MeToo movement that has led to the fall of powerful men; a racial awakening challenging France’s image of itself as a colorblind society; and the emergence of a new generation questioning the principles of the French Republic.

When migrants die in the desperate attempt to cross the seas and enter Western Europe, their bodies are often collected by Martín Zamora, the owner of a mortuary in the Spanish port city of Algeciras. He wrestles with municipal officials to hand over bodies and works with smugglers to find the relatives of the dead, to offer them some kind of closure.

“Sometimes, I get the feeling that some years ahead — in 30, 40, 50 years, I don’t know how many — they will look at us like monsters,” he said. “They’ll see us all as monsters because we just let people die this way.”

Backstage at the Lanvin Fashion Show in Paris.Credit…Valerio Mezzanotti for The New York Times

One of the biggest trends from the spring 2022 fashion shows, which recently wrapped up, was not an accessory nor a color. It was the way many designers showcased men and women in what has long been called “women’s wear.”

Raf Simons, for example, showed skirt suits for him and her. At Marni, models donned giant sweaters with flowers. “By the end of season, it had become so common, it barely registered with me,” Vanessa Friedman writes in The Times. “I just saw clothes.”

Some shows in recent years have either combined men’s and women’s collections or featured clothes that existed beyond the traditional categories of gendered dressing. But “this was something new,” Friedman said. “Like … gender agnosticism.”

This tomato and green bean salad, tossed with chickpeas, feta and dill, makes a perfect side.

The killer doll Chucky is back to terrorize TV.

Mondiant Dogon’s “Those We Throw Away Are Diamonds” is a poignant recollection of life as a refugee after the Rwandan genocide.

That’s it for today’s briefing. Thanks for joining me. — Natasha

The latest episode of “The Daily” is on America’s broken child care system.

Sanam Yar wrote today’s Arts and Ideas. You can reach Natasha and the team at briefing@nytimes.com.

The U.S. will open the Canada and Mexico borders for fully vaccinated travelers.

Is Aaron Judge the Next Yankees Captain?