More from our inbox: 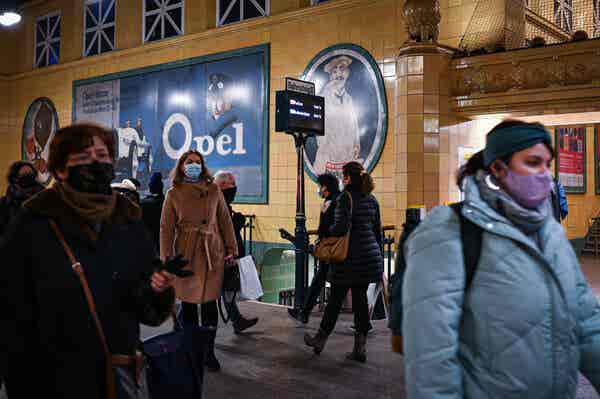 Masks are ubiquitous in subway stations in Berlin.Credit…Lena Mucha for The New York Times

Re “On Masks and Covid, I Found Common Sense in Germany,” by Alec MacGillis (Opinion guest essay, Oct. 13):

Mr. MacGillis’s experience of mask wearing in Germany largely corresponds with mine in Australia, a country headed by a center-right prime minister. Here the left and the right have been united about the need for masks, ensuring compliance from the general public.

It seems to me that the key factors separating us from the United States are twofold: a responsible conservative media and strong political leadership.

The Murdoch papers, with a huge market share in Australia, have been supportive of mask wearing, social distance and vaccines. The conservative federal government, rather than exploiting the anti-mask sentiments of the minority hard right as Donald Trump did, stood behind the country’s medical experts and followed their advice in policymaking.

As a result Australia has more than an 80 percent vaccination rate of those eligible and our life is returning to normal, with one of the best public health outcomes among developed countries. For comparison, with a population 20 percent larger than Florida, Australia’s Covid death toll is 1/40th of the Sunshine State’s.

The report on how the Germans have been dealing with masks and the other societal questions posed by the Covid-19 epidemic was enlightening. Alec MacGillis mentions that he has seen police officers reminding public transit users to mask up. By contrast, I have seen no enforcement whatsoever of the mask mandates on New York City’s subways. In fact, I saw two police officers enter the Astor Place station and neither one of them had masks on.

It might be a boost to our city’s efforts to beat this thing if our police enforced the law, let alone observed it.

The article on masking in Germany reminded me of my recent three weeks in France. People on the street generally did not wear masks, but everyone had a mask at the ready, usually worn on their arm. To eat at a cafe (inside or out), go to a museum, enter a store or go on public transport you needed to wear a mask. People just did it.

To enter a museum or eat at a cafe they were required to show their “Pass Sanitaire,” which was proof of vaccination. We Americans had to show our passport and original vaccine card. Seemed no more traumatic than getting carded to order a drink here. Felt much safer.

Germany was led through the pandemic by a scientist.

The United States was manipulated by a narcissist.

This ought not be overlooked.

Should There Be Means-Testing for Safety Net Programs?

Democrats are debating how many families should be eligible for child care subsidies, among other issues.Credit…Kirsten Luce for The New York Times

At the heart of this debate is the distinction between universal social insurance — exemplified by popular programs like Social Security and Medicare — and targeted social assistance such as Supplemental Security Income and Medicaid.

Both policy approaches are often lumped together in the term “social safety net.” Yet there are fundamental tensions between them. For example, the late Wilbur Cohen, the architect of Medicare, famously stated that programs for the poor are poor programs.

Ideally, there should be roles in a rich country like ours for both approaches working in tandem. Social insurance provides a unifying foundation based on benefits earned through contributions and not subject to means tests. Social assistance enables those whose contributions do not result in adequate benefits to increase them based on demonstrations of need.

This vision remains unfulfilled because of political fissures that your article identified and that have their roots in decades-old policy debates. As recounted by Jill Lepore in “These Truths,” over 55 years ago Lyndon B. Johnson, whose Great Society attempted to meld both approaches in a “war on poverty,” said, “I want to turn the poor from tax eaters to taxpayers.” She notes that by “making this distinction, 1960s liberals crippled liberalism.”

Today’s Democratic Party continues to ignore the lessons of history.

William J. Arnone
Washington
The writer is chief executive of the National Academy of Social Insurance.

You report that Joe Manchin and other conservative-leaning Democrats “say that with spending already at unsustainable levels, something has to give.”

Yeah, Joe, something does. And that something is wealthy people and corporations, in the form of higher taxes.

Scam Calls? Get Even!

I don’t hang up on telemarketing scammers. I lead them down rabbit holes.

If the caller asks for my Medicare card ID, I reel off numbers, letters and keyboard symbols. If told the I.R.S. is calling, I insist on talking with the I.R.S. commissioner, Charles Rettig. If I’m told my assets have been frozen, I ask if I can unfreeze them in the microwave or toaster.

I also say the person they are calling for isn’t here; he’s in a federal penitentiary, having been convicted of telemarketing fraud.

What I See in the Latest Blackface ‘Scandal’