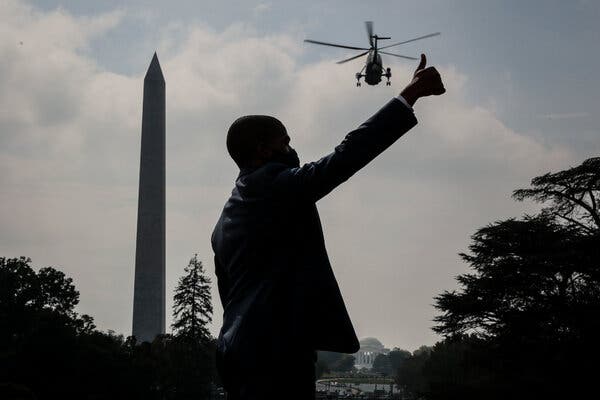 A Secret Service agent gestures as Marine One takes off.Credit…Oliver Contreras for The New York Times

Gail Collins: Hey, Bret, the holiday season is almost upon us — if you presume we start off with Halloween, which is one of my favorites. Are you going to be dressing up as any famous person for parties?

Bret Stephens: Well, I once went to a Halloween bash dressed as Picasso’s Blue Period — I’ll leave the details of the costume to your imagination — but that was in high school. I guess I could go as Edvard Munch’s “The Scream,” assuming you showed up as Kevin McCarthy.

I’m referring, of course, to the House minority leader’s latest effort to make Liz Cheney’s life as unpleasant as possible ….

Gail: Yeah, the House Republicans are certainly going out of their way to try to torture her. I guess they’re shocked by her desire to actually investigate the folks who tried to attack the nation’s Capitol on Jan. 6. Who’d have thought a member of their party would be so picky?

Now she’s got a Trump-backed primary challenger. What do you think her prospects for political survival are at this point?

Bret: My knowledge of Wyoming politics is, um, not great. But I’m guessing that Cheney’s re-election chances aren’t great, either. I think that, at best, she can lay down a marker for the future, proving that at least some Republicans refused to participate in the cult of Il Duce wannabes. Good for her, but what America really needs is another party that stands for classically liberal values like free speech, free markets and free societies.

Gail: Bret, are you talking about a … third party? That would certainly give us opportunities for a lot of vigorous arguing.

Bret: Well, the third party I have in mind would probably do more to split Republicans than Democrats, so maybe you might warm to it. I just want to wrest a remnant of thoughtful conservatism out of the maw of Trumpism. The alternative is that Donald Trump and his minions become the default every time Democrats stumble.

Gail: People need to feel they’re voting for the best real option, not just registering their alienation. The problem with third parties is that terrible accidents can happen. Ralph Nader’s run in 2000 took the election away from Al Gore and gave it to George W. Bush. Which was not his intention, although possibly something you appreciated.

Bret: Just as you no doubt appreciated Ross Perot taking a few million votes from George H.W. Bush in 1992.

In the meantime, Gail, how are you feeling about the leaner Joe Biden — the one who looks like he went on the budgetary equivalent of the Jenny Craig diet by shedding about $1.6 trillion dollars?

Gail: About Bidenism-lite — you mean the new Sinema-Manchin version? I can see how Biden had to do something to get those two on board, but the idea that Joe Manchin, servant of the coal industry, was dictating compromises on climate change, and the utterly compromised Kyrsten Sinema was torpedoing tax rate increases for corporations and the wealthy, is deeply depressing.

Bret: The good news from your point of view is that the downsized plan appears to keep universal preschool education and national child care. The good news from my point of view is that it costs less and corporate taxes may not be raised. Democrats may also come to appreciate that getting rid of some of the climate provisions to force companies to move to clean energy sources may not be the worst thing, politically speaking, when energy prices are already going up, up, up.

Gail: Well, politically speaking, you do have a point about the climate provisions’ chances. We’ll survive, but it’s going to leave future generations stuck with the weather that comes with global warming.

Bret: There’s no good climate solution unless China and India step up. The best thing the United States can probably do right now is invest more in natural gas, which is much cleaner than coal and much more reliable than wind or solar.

On the whole, I think the slimmed-down Biden package thing could be a winner all around. Here I return to my basic principle that the No. 1 priority is to keep Trump from ever returning to the White House, which first requires some legislative victories that are popular with the public.

Gail: It’s a wonder what Trump has done to rational Republicans. If I’d showed you the Biden agenda 10 years ago, don’t imagine you’d have seen it as something you’d be rooting for in 2021.

Bret: The things I never imagined a decade ago that I’d someday be rooting for could probably fill a book, starting with my vote for Hillary Clinton. Also didn’t imagine I’d be agreeing with a dissent by Justice Sonia Sotomayor while worrying about a Supreme Court over-dominated by conservative justices.

Gail: Do you think that Texas abortion law is going to last long? I’m hoping the Supreme Court, even in its current conservative condition, is going to be appalled by the part that has the general public doing the enforcement. Via do-it-yourself lawsuits against the abortion providers and anyone who helps them, down to drivers who bring the patients to clinics.

I hear this kind of thing is a new conservative trend. Care to explain?

Bret: There are two abortion laws at issue here. There’s the case out of Texas, regarding Senate Bill 8, which bans virtually all abortions after six weeks or so and delegates enforcement to private citizens rather than state officials. The bill was written that way because it was an attempt to get around judicial review, which typically requires a state official to be a defendant.

Bret: The court made a bad mistake by failing twice to enjoin the Texas law. But I’m betting it will still overturn it because the alternative is a license to vigilantes everywhere to deny people their constitutional rights, which could also include “conservative” rights like the right to bear arms — in a blue state.

But then there’s another abortion case out of Mississippi, based on a law banning most abortions after 15 weeks. That’s a more clear challenge to Roe v. Wade, and it’s the one we should be really thinking about.

Gail: You know, Texas politicians are great at doing spectacularly awful things that make headlines. But, meanwhile, Mississippi always seems to be able to be much worse without anybody noticing.

Bret: The conservatives on the court will do themselves and their cause irreparable harm if they uphold the Mississippi law and overturn Roe. There will be a renewed push to pack the court with new justices. It will turn access to abortion into a real force for Democrats in purple states and help them in the midterms. It will probably push Stephen Breyer to retire now to ensure he can be succeeded by a liberal justice. It will do a lot to help the Democratic ticket in 2024. And it will push Congress to seek legislative means to curb the court’s authority.

Gail: Hey, we’ve been agreeing for a while now. Let’s get back to Biden. How did you like his town hall the other night?

Bret: I felt like I was holding my breath half the time, hoping he’d be able to complete his sentences. Most of the time he did. But some of the lapses — like declaring that it was U.S. policy to come to Taiwan’s defense in case of attack, when it isn’t — were disturbing because they’re potentially so consequential.

Gail: He did seem a bit lost toward the beginning, standing there with his fists clenched — he looked as if he was holding invisible ski poles. And he’s never going to be a wowser as a public speaker.

But for the most part his answers all made sense, he was personable with the crowd, and, given the crazy scene he’s dealing with in Washington, I thought overall he made a good impression.

Bret: The line that I keep hearing from people who have known Biden over the years is that he’s “lost a step.” The same could probably have been said about Ronald Reagan in his second term, and he still managed to have real successes, like comprehensive immigration reform, a major tax reform, better ties with the Soviet Union and the “Tear Down This Wall” speech in 1987, just two years before the Berlin Wall fell.

Biden’s performance is still much preferable to Trump’s, who kept his step but lost his mind. Even so, it worries me. Voters notice, even if much of the press is too polite to mention it.

Gail: Reagan’s second term was really scary. If Biden runs again we’ll all have good reason to debate whether he’s too age-limited. But right now, he seems to be well in control, even if you don’t like all his policy choices.

Love your Trump line, by the way.

Bret: Thank you. And that reminds me: Please be sure to read The Times’s Book Review section celebrating its 125 birthday. My favorite feature is a sampling of letters to the editor, including one reader’s criticism of Henry James’s prose: “By bad,” the reader wrote, “I mean unnatural, impossible, overdrawn as to the characters, and written in a style which is positively irritating.”