Is there a whole class of men who no longer fit into the social order?

A decade ago, Marianne Bertrand and Jessica Pan, economists at the University of Chicago and the National University of Singapore, concluded in their paper “The Trouble with Boys: Social Influences and the Gender Gap in Disruptive Behavior” that

Bertrand and Pan focus on the crucial role of noncognitive skills, on how “factors such as study habits, industriousness and perseverance matter as much as cognitive skills in explaining occupational achievement.” Noncognitive skills, they write, “are not fixed but are in fact quite malleable, and can be shaped by early intervention programs.”

The effects on boys of being raised in a single-parent household are particularly acute in the development of noncognitive skills, according to Bertrand and Pan:

There are a number of research projects that illuminate the ongoing controversy on the subject of men and their role in contemporary America.

First, an excerpt from a 2016 paper by David Autor, an economist at M.I.T., and four colleagues:

Second, part of a 2015 paper by Francesca Gino, Caroline Ashley Wilmuth and Alison Wood Brooks, who were all at the Harvard Business School at the time of writing:

Third, a passage from an article by Colleen Flaherty a reporter at Inside Higher Ed:

And fourth, a quote from a 2013 paper by Autor and Melanie Wasserman, an economist at U.C.L.A.:

I sent the four references above to Arlie Hochschild, a professor of sociology at Berkeley and the author of “Strangers in Their Own Land: Anger and Mourning on the American Right” for her views. She emailed back:

In a 2018 essay in The New York Review of Books, “Male Trouble,” Hochschild described the predicament of less well educated men:

While many of the men Hochschild writes about see a future of diminished, if not disappearing, prospects, men in elite professions continue to dominate the ranks of chef executives, top politicians and the highest paying professorships.

Frances E. Jensen, chair of the department of neurology at the University of Pennsylvania’s Perelman School of Medicine, taking a different tack, argues that boys’ brains mature more slowly than girls’ brains do, a difference that is particularly striking in the adolescent years. In a 2017 interview with The School Superintendents Association, Jensen stressed the crucial role the still maturing brain plays in the lives of teenagers:

And then she added a crucial point:

A major 2015 study, “The Emergence of Sex Differences in Personality Traits in Early Adolescence: A Cross-Sectional, Cross-Cultural Study” on which Marleen De Bolle, then of Ghent University, was the lead author — with contributions from 48 additional scholars — described some of the consequences of differing rates of maturity and development:

What are some of the other factors contributing to the differing academic performance of boys and girls?

In a 2019 paper, “Family Disadvantage and the Gender Gap in Behavioral and Educational Outcomes,” Autor and Wasserman, along with David Figlio, Krzysztof Karbownik and Jeffrey Roth, conclude that:

“Parental investments in boys versus girls,” they write,

In an email, Autor wrote that the downward trajectory of boys and men from single parent homes should not mask the continuation of a very different trend at elite levels:

In their 2013 paper, “Wayward Sons: The Emerging Gender Gap in Labor Markets and Education, ” Autor and Wasserman make the case that:

The consequences are depressing:

I am quoting at greater length than usual from Autor and Wasserman because they have done the most thorough job of bringing meticulously compiled and compelling evidence to bear on male disadvantage. They warn that “a vicious cycle” may be emerging, “with the poor economic prospects of less-educated males creating differentially large disadvantages for their sons, thus potentially reinforcing the development of the gender gap in the next generation.”

With the onset of

There are other forces driving the vicious cycle, Autor and Wasserman write:

Why are boys falling further behind than their sisters? Autor and Wasserman reply:

Another reflection of this pattern, according to Autor and Wasserman, “is the growing divergence in high school girls’ and boys’ expectations of obtaining a four-year college degree.” Among cohorts of high school seniors interviewed between 1976 and 2006, “a gap opens between boys’ and girls’ expectations for BA attainment starting in the early 1980s and cumulates thereafter.” They add that “growing up in a single-parent home appears to significantly decrease the probability of college attendance for boys, yet has no similar effect for girls.”

It is not just fatherlessness, the two economists write. A key factor is that single parents — disproportionately female — are “more limited in the amount of time they can devote to child care activities.” If, then, “boys are more responsive to parental inputs (or the absence thereof) than are girls, it is possible that the gender gradient in behavioral and academic development could be magnified in single-parent households.” They cite a study demonstrating that single mothers “report feeling more emotionally distant from their sons and engage in disciplinary action such as spanking more frequently with their sons. These disparities in parenting are largely absent from dual parent homes.”

Adam Enders, a professor of political science at the University of Louisville, sees the troubles of young white men in particular as an outcome of their partisan resentments.

“My take is that lower class white males likely have lower trust in institutions of higher education over time. This bears out in the aggregate,” he wrote, citing a Pew Research Survey.

Shelly Lundberg, a professor of economics at the University of California-Santa Barbara, does not dispute the data showing large gender differences in educational outcomes, but she has a different take on the underlying causes, focusing on “the concept of fragile or precarious masculinity, in which manhood (unlike womanhood) is seen as a social state that requires continual proof and validation.”

In a 2020 article, “Educational Gender Gaps,” Lundberg argues that

Lundberg’s position that norms defining masculinity and femininity, Enders’s political take and the argument of Autor and other scholars that boys suffer more than girls in dysfunctional homes are likely more complementary than conflicting.

The bigger question is how the country should deal with the legions of left-behind men, often angry at the cataclysmic social changes, including family breakdown, that have obliterated much that was familiar. In 2020, white men voted for Trump 61-38. Many of these men have now become the frontline troops in a reactionary political movement that has launched an assault on democracy. What’s next?

No Wonder the French Are Angry 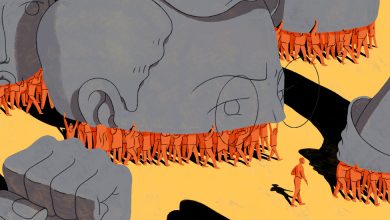